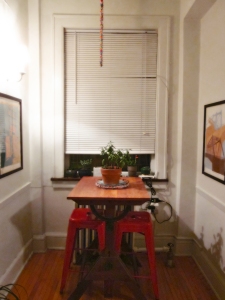 Through exposure to Le Corbusier and pithy one-liners from other sources, I’ve developed a theory of thing-ownership. They can be useful, beautiful, and/or nostalgic. I like a hat trick, but I settle for 2/3 (and oh, the inevitable horror of an ugly useful item that only reminds me of the lack of options in our meeting!). The drafting table here is a total win, however. Can I eat at it? Yes. Is it beautiful? Yes. Does it remind me of the years I felt totally supported by society (i.e. the department) in my natural tendency to be curious about, roughly-speaking and without exaggeration, the world and all that is in it? Yes. (I miss school (sniff, sniff!)!)

Ahem. The table. We first met outside a room being renovated in my department. Heart palpitating, I made my way to She Who Knew The Details (i.e. the departmental secretary? administrator? overseer of the tangled human network?) to find out its destination. She’d had her eye on it as well but after a few decades in the job (with the associated furniture benes), she didn’t have space for it. And so it came home with me.

In my last place, it served as my sewing table (since the dining space was a huge table of unknown provenance, having appeared in a time preceding memory in the long recitation of overlapping roommates). But in my nighttime daydreams, which tend to be focused on rearranging furniture in hypothetical apartments (yes, sometimes yours) as I fall asleep, it’s always a dining table.

Moving this past summer, I found myself stripping the top of varnish and eventually sanding and oiling it. It wasn’t a conscious decision; sometimes you’re frantically packing, surrounded by boxes and wearing rolls of packing tape like bangles, and the next thing you know flakes of varnish are piled on the floor at your feet. And it could happen, too, that you might subsequently be unpacking and cleaning for a friend’s visit when you stop with a start to find that you didn’t make it to the proper storage receptacle with the sandpaper. Because, whoops!, you’re apparently refinishing a table instead! So much for free will!

The red “tabouret” stools were an exercise in making impulsive decisions (which, despite the impression you might get from the above, I need to practice) and I’m pleased with how well they fit, both physically and aesthetically. The posters are Adam Turman, Minneapolis legend (and the embodiment of Minnesota Nice) and the fact that they’re on the walls instead of leaning behind a stool is due to the inspirational speeches of Minneapolis Ambassador to Lands East of the Mississippi, E.M. And internet is provided by USI Wireless, whose major selling point is that they’re neither Comcast nor Qwest (also that they’re way cheaper) and whose minor selling point is that their customer service appears made of of individuals with infinite patience when dealing with the tangential questions of the unquenchably curious (see above).

As for the tangle of wires, the closed blinds, the not-quite-focused nighttime photos? Consider it part of the intimacy of a blog and a testament to authenticity.