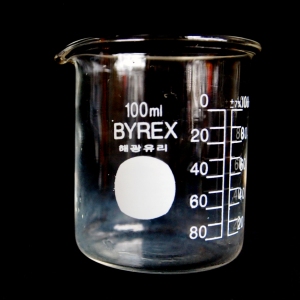 I was lucky enough to spend five weeks in Seoul, Korea visiting two of my brothers there a few years ago. One of my favorite souvenirs of that time was this beaker. I picked up two different sizes in a small store in one of the many specialty districts around the city, but this was the only one that made it back unbroken.

I tend to be fan of items that either support or illustrate categorization and standardization–I am infinitely fascinated and awed by the complex and specialized systems that we as humans have to categorize, communicate, and make sense of the world around us. Bonus points for tools, as reminders of possibility and potential. That alone had me trying to convince my brothers to pick up a set of beakers for serving drinks.

I also approach graphic design as part of the continuum of communication, culture, and language systems. The Korean printing on this beaker made it a no-brainer for me. But I didn’t notice ’til I was unwrapping it back in the U.S. that this isn’t a more common “Pyrex” beaker for your most exacting science and modernist cooking kitchen needs. This is a “Byrex” beaker. Now we’re in the stratosphere of awesome, orbiting your everyday test tubes and hipster science lab accessories. The Korean language doesn’t distinguish between “b” and “p” sounds and as often happens with language, without needing to hear the distinction between sounds, native Korean speakers lose the ability to distinguish between them (at least based on my understanding of how humans learn languages). This means that “b” and “p” sounds from English can post special difficulties for native Korean speakers, including those who are working in the side street off-brand copycat science beaker industry.

The fact that this kind of mistake made it into production is one of the reasons I enjoy seeing knock-offs and cross-language items. Every time I look at my Byrex beaker (it sits in my bathroom holding a small collection of lake glass), I’ve got a window into spoken and written language, translation (specifically between English and Korean), marketing, branding, production, and happily tripping into a small specialty section of container/packaging stores somewhere in Seoul with two of my favorite people in the world.