Last night I dreamt of thrift stores and plant cuttings. It’s all vague now, but Senecio rowleyanus (string of pearls/string of tears) was there, along with Sedum morganianum (burro’s tail/donkey’s tail). I woke up wanting to post about one of my favorite (specific) plants in one of my favorite pots.

The plant:
I picked this one up a few years ago at my favorite local thrift store where a volunteer brings in seedlings in old yogurt containers every few weeks from about March-September. I love how old-school it feels to pick up unmarked plants in a hodge podge of plastic containers, with absolutely no attending information. The prices are generally $.50-1.00, varying from free to $2.00 depending on the store manager and the time of day, which seems about right given the gamble it is (I have one plant from there that’s still unidentified after quite some googling: bulbous root, long sharp thorns on branching woody stems with slightly waxy green/red non-serrated leaves at the ends, prefers indirect but bright light, if you’re one of those people who does text-based plant identification).

I was able to track this one down relatively easily. It’s got the clear markers of a succulent (thick leaves for water storage in dry times) and reminded me of a bonsai–those two were all I needed to play with in Google image search to turn up its name: elephant food/miniature jade. I think I tend to slightly underwater it–the pot has no drainage holes and is relatively shallow, and I haven’t successfully grown cuttings/leaves from this one, so I’m more wary of overwatering than usual. But it’s been pretty hardy in its little three-footed pot for a few years and if my care is stunting its growth, then perhaps I can chalk it up to my poor attempts at bonsai? (I’ve read just enough to know that it’s a form of plant-raising that’s not for me.) 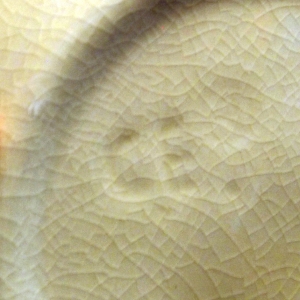 The pot:
FIguring out its provenance has proven a bit harder. It’s a creamy white glazed ceramic pot with heavy crazing, sitting on three feet (why does something being footed make it cuter?). It’s signed or stamped on the bottom and appears to read “CE” though with a hint of something after that (a mark or trademark?).

After some googling, I’m leaning towards a Chinese “brush washer” based on most similar results, but without any certainty. The shape overlaps with ceramic versions, however, and my initial searches were immediately bringing up Chinese ceramics as the closest fit like this. There are modern variations like this one, as well as plenty of antiques like this, and this (I actually have or had one very similar to this, but in a mossy green, that I stopped using for plants because it was too shallow–I’ll have to check if it’s still in my plant-supplies cupboard).

The rocks:
The rocks here represent a selection of those I’ve picked up at some of my favorite rock finding locales (in this case, Duluth, Minnesota or Inish Mor, Galway). As they say, I’ve certainly got a type! 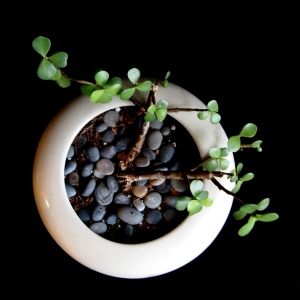 As always, I’m curious about all of this! Not a brushwasher? CE is actually a U with a crown? My elephant food plant looks like it’s being tortured slowly and needs repotting? Let me know!