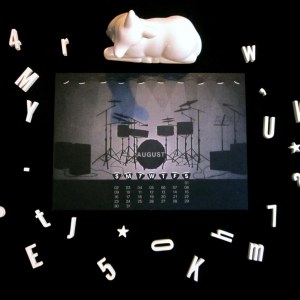 A confession: this design was less locked to a month than most and is the only one I styled and shot two different photos for (seen above and below). But I knew I wanted to do a music scene–I love the look of hazy spotlights, a tangle of wires and tripods and instruments, the way stages are so ephemeral (up and down in minutes) and haphazard, utilitarian and functional for sharing music in shadows.

Whether this intersects best with August or June or November, I’m not sure. But even when musicians are performing in cozy basements, there’s something inherently transitory about the equipment. When they’re at (summer) festivals, with accordion folding tents and temporary fences, food trucks and port-a-potties, it feels close to hitting the primal mark of being humans in motion. Whether it’s nomadic people or traveling performers or military encampments, there’s a kind of functionality that appears and lends itself to convergent evolution when you’re moving from site to site: figuring out food and toilets, designing shelters that lend themselves to quick assembly and small luggage space, balancing a desire for stability and security with enough flexibility to make movement worth its costs.

And there’s the experience as the audience, come to encounter something novel or something dear. The shared experience of intimate imperfection, unexpected improvisation, and really ancient connection that makes people brave mud puddles and sunburns, stumbling drunks and packed sweaty bodies.

In the above styling, I used a white porcelain fawn with white porcelain letters while listening to this interview with Killer Mike (rap is one of my favorite genres, though I wasn’t previously familiar with him). I wanted to capture something of the intersection of music and language and the responsibility and vulnerability that comes with that. Or just use the plain white porcelain things I had around for a sort of stark image. Who can say.

In the styling below, I was remembering my neighbors who were in a local band. Along with the frequent sounds of instruments being played (starting with a very cheerful brass rendition of Hey Jude on move-in), they brought a new pattern to the neighborhood with a small bus doing early evening pick-ups and late night drop-offs of a handful of them on weekends through the summer. As a totally musically untalented person (not an understatement and not for lack of effort), it was easy to romanticize the few hours beforehand into something like my own prep for fancy events: dressing for the lights and the party, last minute fixes and pins, pre-festivity twirls of the baton, and anticipatory or semi-ritualized playlists of music-to-apply-make-up-by. 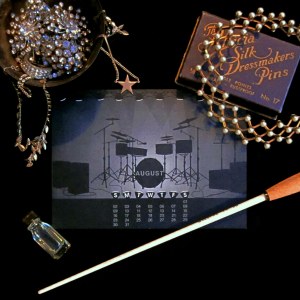