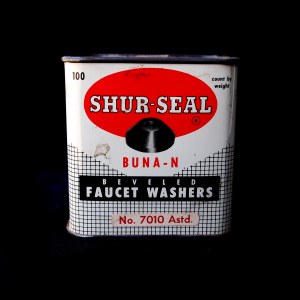 I found this tin in a bin full of metal recyclables and I may’ve crowed a bit on spotting it. Admittedly I was already having a good day–my friend and fellow geographer had just shared his latest book with me and that kind of enthusiasm is contagious–but this was a bit of icing on the cake. The graphics! The colors! The name and description and typography and illustration and simple grid background! Visions of it as a planter immediately filled my mind, but I kept digging for its lid and I’m so glad I did. 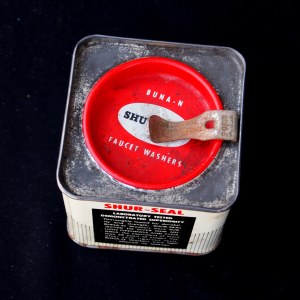 This lid! Do you see that metal tab? It’s attached. Attached to the lid! It’s essentially a built-in tiny church key or crow bar or flat-head screwdriver or rusty piece of metal or whatever you’d otherwise use to open a persistent and tightly closed metal lid. Oh, wow! It shattered all my previous preconceptions about what lids for tins of plumbing findings could be in this world! All the assumptions I had held about mid-century tin construction? Destroyed! 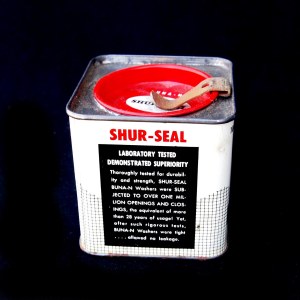 To use, grasp the metal and pull up. Pivot to next point around circle, repeat until lid lifts easily.

I love finds like this, on days like this. Totality of text reads:
(front)
100 count by weight
SHUR-SEAL
BUNA-N
BEVELED FAUCET WASHERS
No. 7010 Astd. (sticker)

(side)
SHUR-SEAL
LABORATORY TESTED
DEMONSTRATED SUPERIORITY
Thoroughly tested for durability and strength, SHUR-SEAL BUNA-N Washers were SUBJECTED TO OVER ONE MILLION OPENINGS AND CLOSINGS, the equivalent of more than 28 years of usage! Yet, after such rigorous tests, BUNA-N Washers were tight. . . . allowed no leakage.

Addendum.
I would be remiss not to talk a bit more about Bob’s new book. I’m a city girl who’s always been fond of both birds and trees in a kind of inchoate way–there is something about both that resonates and I enjoy learning about them where they intersect with other passions of mine (pretty things, graphic and urban design, symbolism; climate change, species movement, and biodiversity; public health and well-being), but I’ve never been anything resembling a birder. I mean, I saw turkeys in the street outside my apartment and my knee-jerk thought was “giant pigeons!”

But Bob is sincerely passionate and curious about birds that live in or migrate through Minnesota in particular. Hearing him talk about birds and landscape change is just plain fascinating, and while part of that is that he’s just a really cool guy (being awesome is endemic among geographers!), a bigger part is that his passion is infectious and has seven decades of learning and sharing behind it. Want to know what Southdale was like when it was marshes instead of parking lots? What the crows are up to at dusk as they circle and fill the trees of Minneapolis by the thousands? What sets a skilled abstract artistic interpretation of a bird apart from an offensively ignorant one? How deadly the new Vikings Stadium will be to birds on their migration route along the Mississippi since the Vikings are refusing to use bird-safe glass? Bob’s ready to talk about it (though not in this book; this is a random sampling of on-going conversations we’ve had).

He’s got the kind of complex and nuanced knowledge, backed up by obsessively thorough research, that is a boon to books like this one. If you’re a fan of Minnesota’s State Parks, or birds, this book is a good one to pick up.

One thought on “Study: Shur-Seal tin”