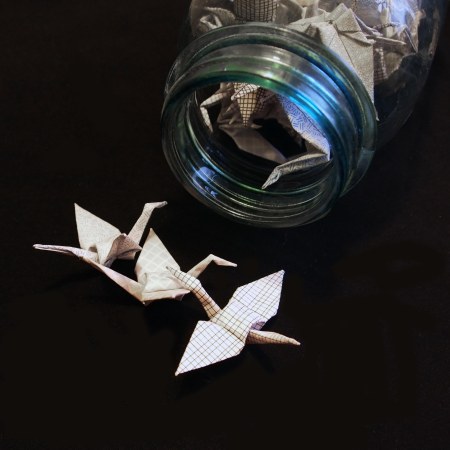 This post was originally intended to be my seasonal offering to the vast internet encyclopedia of How To Decorate Your Space For Festive Winter Mood Survival, but it’s morphed into something more akin to happify Makes Paper Cranes Again. A few years ago, I got it into my head to make a few garlands of security envelope patterned circles, which I’ve since left up year round; they’re subtle and appealing, with a bit of nice movement in even the small airflow produced by the heat shifts of a radiator.

I’ve been continuing to collect those envelopes since then and finally, as a part of my I’m-inside-again-what’re-these-piles cleaning, got started on Security Envelope Part 2: Paper Cranes.

The squares I’ve used here are 2.5″. I chose a larger size than my usual 1.5″ because envelope paper is a heavier weight than origami paper, which means the folds are bulkier. Also, since these are all traced/hand-cut, the pieces are less precise to start with. You’ll note below that some still bear the scars of being envelopes, thin patches where they were rudely ripped open, turning up where they were folded, even a bit of address-window cellophane.

Most dizzying pattern yet 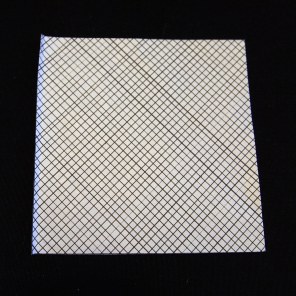 Security envelopes come in a pleasing variety of patterns; in this batch above, I’ve got nine distinct patterns, two of which come in two different scales. The colors are generally shades of blue/black. In the last project, I spotted at least two more that I don’t have this time around, including one in green. I’d point you to this Wikipedia section, but unfortunately it offers little beyond a link to a collection of patterns from around the world.

For me, they also evoke the blue/indigo-and-white design history of patterns in Japan (e.g., shibori) as well as China (e.g. blue-and-white porcelain).

Most of them appear chosen at random, but I suspect (naively? hopefully!) that my favorite pattern, pictured at top left below, was purposely selected by the City of Minneapolis’ financial department–it reminds me strongly of a city map, albeit of a place with a very different history from the highly ordered grids of Minneapolis. I like to think of some dedicated city employee holding whatever catalog security envelopes are found in, feeling just as much joy choosing this option as I felt opening it. My hat is off to you, anonymous Minneapolis envelope-chooser!

Favorite to least, right to left, top to bottom.

Also working for me is the symbolism behind them: the inside exposed and revealed, the reuse of one of the more ubiquitous and therefore unseen items of waste, an icon of peace out of a false sense of security, a relic of analog security in the age of serious cyber security and privacy concerns, art out of the mundane.

I’m not sure if/how I’ll further play with them (beyond continuing to make them). Right now I’m storing them as I store all my finished-but-unstrung cranes, in clear glass (two other sets of other sizes/patterns are accumulating in spherical glass vases around my apartment). 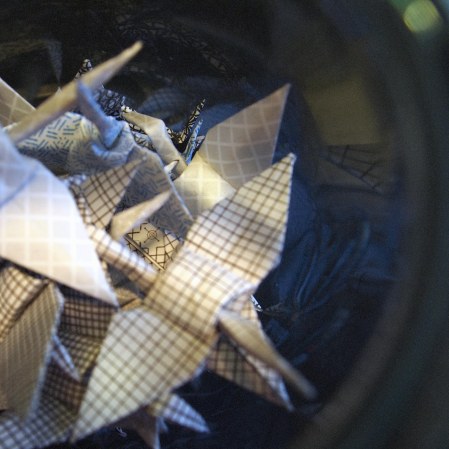